British studies have shown that TODAY is the saddest day of the year. The idea is that by this time (the third Monday in January to be exact), the high from the Holidays have worn off (presents have been opened and exchanged if needed, New Year sales are dwindling down, relatives and friends have gone from visiting or you’ve returned from travels, etc), resolutions have been made and broken, the daily grind at work has started up again… I found it a little surprising when I heard this since the third Monday in January is usually off (for schools and federal offices) in observance of Martin Luther King, Jr,’s Birthday… but seeing as how this was a British study.. you get the picture. Perhaps this will explain why I’m feeling abnormally depressed and out-of sorts today (especially since I don’t get today off).

Anyway.. Working out has been better since I got the gym membership. I’ve been trying to hit the gym for swim and/or weights and Stairmaster about 3 to 4 times per week. Haven’t been back to running since my legs are still hurting (I’ve self diagnosed my shin-splints to be caused be overuse and jumping back into running to fast too soon on the treadmill). I’ve decided to give it time to heal up before I aggravate the injury further. FINALLY got back on my mountain bike this weekend since BEFORE the holidays…

It took a lot of energy to hold up the bike against the wind..

Minh and I took an “easy” ride up Maple Springs to Four Corners. I was DYING… so we decided to turn around there. It was actually a beautiful day for a ride, and I’m very happy that we went, but was a little disheartened that I wasn’t able to go further or faster. Looks like I have a lot of building I need to do to be ready for Traverse in May. 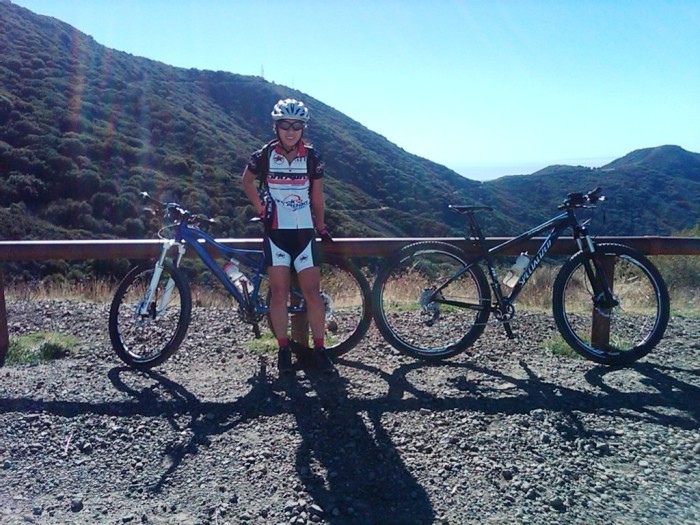 I tried to smile.. but was very tired..

The rest of the weekend was spent recovering and getting errands run. Tested out the BOB trailer on the back of my road bike (since the skewer was not long enough for the mountain bike)…

Testing out the BOB trailer

And.. I’ve paired down the race schedule a bit because I’m not nearly as ready as I wanted to be at this point, and feel like removing some races will make me better at the ones I really want to do well in. So.. Mostly, I’ve elminated most of the Kenda Cup West races, with the exception of Bonelli because it’s close. Since the real focus this year is Xterra and Traverse, I want to make sure that I’m ready and in tip-top shape for those.

Hopefully my sad state-of-mind will end when the saddest day of the year is over.. till then.. HAPPY MONDAY!